It’s been a decade since those 16 days in February 2005 when the artist duo Christo and Jeanne-Claude installed 7,500 gates along Central Park’s walkways, each adorned with shimmering saffron-colored panels creating what Christo described as “a golden river appearing and disappearing through the branches of the trees.”

It was a spectacle like no other in the park’s long history. The $20 million project, financed by the sale of Christo’s artworks, pumped nearly $250 million into the city’s economy and attracted four million visitors. “It put New York City in the international headlines for something hopeful for the first time since 9/11,” recalled Patricia E. Harris, the former deputy mayor and, for decades, a leading supporter of the project with her boss, Mayor Michael R. Bloomberg. “It reminded the world that our city’s artistic spirit was alive and well.”

And also showed the world that art has the power to change the landscape. Whether they were wrapping the Reichstag in a million square feet of fabric, or raising a 365-foot-high curtain across a valley in Colorado, Christo and Jeanne-Claude produced visual feats that resonated with the public in a way few artists ever have. “You become part of the dialogue,” said Germano Celant, the Italian curator. “These projects are a kind of dream, one that everybody can understand and everybody can participate in.” 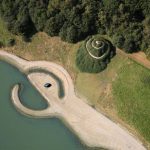